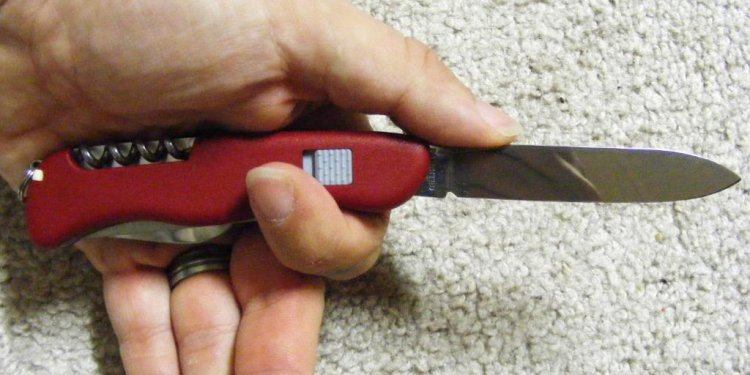 
At any given time during a Sword Fight, expect the two blades to lock together, with extra points for Sword Sparks. This usually works best if the swords are crossed horizontally between the combatants, who stand close together and push against the clinch, each trying to knock the other off balance. It can also be done in a knife fight, with grabbing wrists or fists instead of locking blades. If a character is Dual Wielding, they will usually place one blade behind the other in an attempt to use both arms for leverage. This is the ideal moment (since Talking Is a Free Action) to address the combatants' mutual issues with some confrontational dialogue, or to toss out taunts or threats. A Combat Pragmatist may instead let slip with a Groin Attack or Glasgow Kiss, since the other can't really defend against it. Or the two fighters may simply stand there, stare at each other menacingly, and bulge some biceps. If both combatants are super-strong, or sometimes even if they're not, the blades might grind against each other with sparks or even visibly glow. Technically, this is called tsuba zeriai in kendo and anbinden or simply "bind" in the medieval German longsword tradition, where both parties try to gain a position for an attack by jockeying around so that the 'strong' (the half closer to the hilt) of one's blade is pressing against the opponent's 'weak' (the other half); the kinds of attacks that can be launched from this position vary from thrusts and snapping cuts around the opponent's blade to trapping (including the famous Groin Attack), grappling, and tripping/throwing movements. Also called (body to body) in fencing/stage combat. Compare Beam-O-War and Brawler Lock.

You'd be hard pressed to find a battle anime that doesn't feature a sword lock at some point, so below are some examples of noteworthy ones only.

does this with the characters' staves, and any other device that could be swung around as a melee weapon. features a blade lock between D's sword and the vampire Meier Link's cape complete with sparks and heated blades. Happened a few times on . When this happened to Yahiko, he did the smart thing and kicked Gohei in the nuts. When this happened between Kenshin and Saito, Saito shoved Kenshin against a wall and nearly managed to push the blade into Kenshin's throat. . Most dramatically used in the Zoro and Mihawk fight, where Zoro, who wields three swords, is completely denied a hit by a basic knife. Happens in the openings of It happens twice in the show too, both with Kira facing Athrun and later Shinn. Both times neither combatant is able to overpower the other. With Athrun Kira pulls a second saber and slashes him with that, while Shinn pulls back to try to surprise Kira with a rifle shot. , Gp 01 vs. Gp 02 fights are also famous for having blade locks. In one of 's first story arcs, Zabuza and Kakashi locked blades for a minute or so. Zabuza had a great carving knife of a sword, bigger than he is. Kakashi had a kunai, a stubby dagger about as long as your hand. If the battle had stuck to the rules of real life Kakashi would now be "the Two-Fingered Ninja". This also happens when Sai attacks Naruto out of nowhere. Sai takes advantage of this moment to question whether Naruto has any equipment. Also happens in the Pain arc. Ebisu blocks Pain's chakra blade with the point of his kunai for several minutes. shows a decidedly pragmatic approach when Mifune locks with Black Star, grabs one of Black Star's hands, and breaks two of his fingers. In, Sayaka and Kyoko get into one. To illustrate how completely outclassed Sayaka is, she holds her sword with both hands and Kyoko holds her spear with one hand. Sayaka cannot budge Kyoko, then Kyoko shifts her arm and sends her flying. In, when Kenpachi tried to get into one with Unohana, she drew a dagger with her free hand and stabbed him. In, it usually appears as an excuse during fights to keep up the Trash Talk and dialogue exchange, as exemplified by Hanzo and Saizo's second fight.

Subverted in of all places. When Robin Hood and the Sheriff were in the middle of one, they talked for a bit and the Sheriff tried to use a knife. Probably a homage to, in which Robin Hood and Sir Guy of Gisbourne similarly talk at intervals throught their duel; during a Blade Lock Sir Guy stealthily pulls a dagger out and tries to stab Robin with it. Robin being an honorable sort, but not Lawful Stupid, when the dagger ends up missing Robin's head, Robin runs Sir Guy through with his sword. Or possibly to, when the Sheriff raises his blade for a killing blow on the prone Robin, who pulls out the Sherriff's own dagger (He had given it to Marian, who had then given it to Robin) and plunges it into his heart. Parodied in, where Helmet and Lone Starr's Schwartz blades (akin to lightsabers) not only get locked, they twist up. "Shit! I hate it when I get my Schwartz twisted!" Subverted in . When the Bride and Elle lock swords in their final battle, the Bride simply takes the opportunity provided by the drop in defenses to tear out Elle's other eye. Frequently in the films. Note that this is an unbelievably stupid idea, as the lack of a crossguard on most sabers would mean that if their opponent slid the blade up they'd probably lose half their hand, not to mention quite possibly having their lightsaber destroyed. Obi-Wan does exactly this to cut off two of General Grievous' arms in . Consensus appears to be that two lightsabers stick together when locked, preventing (or at least making difficult) that kind of move. Obi-Wan appears to twist his blade, rather than simply sliding it downwards. Done in with sledgehammers rather than swords. Done in as a Breaking Speech to Villard by Suba about what really happened the night Suba killed Villard's father. Thorin and Azog get into one in . Justified in this case as Azog's blade is forked and Thorin is on the ground pushing up with both hands.
Source: tvtropes.org