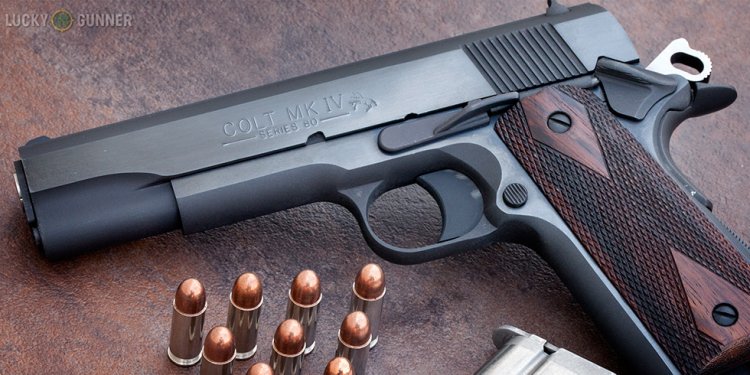 The shooting world seems absolutely awash in "custom" 1911-type pistols these days. There was a time when the typical 1911 was of the "mil-spec" variety, meaning that if you wanted something better (or simply more unique) than the average GI-issue pistol, you had to have your gun worked over by a pistolsmith who specialized in customizing .45s for defense or competition use. Many of these modifications made perfect sense to have done. Larger sights, trigger work, reliability tuning, etc were considered a means of improving the 1911's capabilities, and in fact many of these changes did indeed rectify some of the stock GI pistol's shortcomings. However, a lot of other modifications were merely a means of personalizing the firearm, so that the owner would have something just a cut above the rest. It was much like a Japanese Samurai with his hand-made katana, created by a master craftsman who made the weapon exactly to suit the owner. Such a weapon was a unique work of art, and it was considered an extension of the warrior's own soul. Many contemporary gun owners have had the same desire to have a personalized sidearm, something that made them feel they had something nobody else had and that was uniquely theirs. To that end customizing 1911s became a cottage industry, with untold numbers of gunsmiths and parts vendors getting into the act.

Soon the idea was established that you actually HAD to have one of these tricked-up 1911 pistols if you actually considered yourself a serious handgunner. Using a plain-jane, mil-spec 1911 for defense was something only WW1 doughboys and ignorant shopkeepers did. This trend did not go unnoticed by many 1911 manufacturers, who eventually began making new pistols straight from the factory with the features considered most desirable in a "combat .45", such as no-snag hi-visibility sights, beavertail grip safeties, ambidextrous controls, forward cocking serrations, and flat-black "ninja" finishes.

Unfortunately, it seems that these days the industry has lost focus. Just about everybody now makes what is typically called a "factory custom" 1911. Here's just a short list: Kimber, Springfield Armory, Charles Daly, Wilson, Les Baer, Rock River Arms, Valtro, Dan Wesson, Smith & Wesson, Caspian, Ed Brown. just to name the most well known manufacturers. This list doesn't include the small one-man custom shops like Larry Vickers, Dick Heinie, Dane Burns, and the like. As a result of all this, it seems to me that having a custom 1911 just ain't what it used to be.

Your "personalized" handgun nowadays looks just like everybody else's, and the only thing that makes you stand out from the rest is how much you paid to have some famous gunsmith's name engraved on the side. Perhaps in light of all this a return to the basics is in order, sort of like starting over with a fresh sheet of paper. Re-enter Colt, the original 1911 maker and one of very few who still produce them in the "classic" configuration.

The pistol under review here is actually nothing new; only the name keeps changing. Colt has never ceased making the 1911 since its debut back in the year 1912. The basic design has remained the same throughout all these years, although a number of minor internal changes have been made from time to time. In 1983 the Series 80 models were introduced with the new firing pin safety system, which guarded against an accidental discharge should a loaded pistol be dropped onto a hard surface. In 1991 Colt revamped their 1911 line by turning the basic Government Model into a value-priced item. They did this by dropping the practice of polishing the flats and using walnut grips, and instead adopting a less expensive all-matte finish with rubber grips. This new variation was named the M1991A1, but it was really just a marketing ploy to catch up to competitors who were making less expensive clones of the 1911. Only a year later the rest of Colt's 1911 line was updated with many of the custom features buyers had been asking for, thus creating the "Enhanced" line of pistols. So while Colt began chasing after the "factory custom" market with those, the M1991A1 soldiered along as one of the few "mil-spec" options available to consumers who wanted a basic 1911-type pistol. However it appears the market is once again changing, as many buyers tired of the saturated "custom" 1911 market are now demanding the polished flats and classic lines of older 1911s once again.