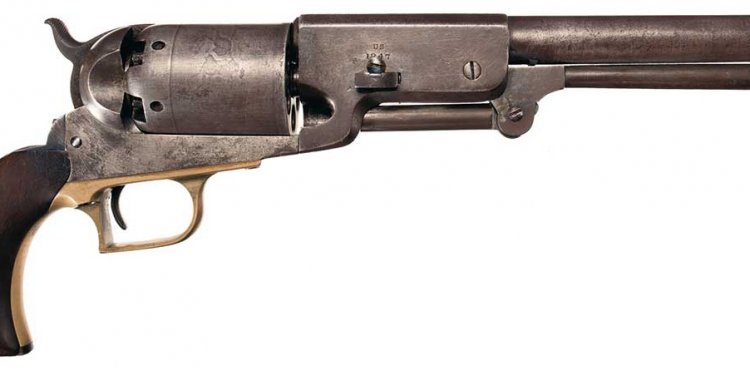 By hich Army revolver is better, Colt or Remington? That’s the kind of “Ginger or Mary Ann” question that us cap-and-ball shooters can get passionate about. I just wish it was as easy to choose between Colt and Remington Army revolvers. They both have a lot to offer.

The Remington-Beals was quickly followed by the Model 1861, which was actually made in 1862. It’s known as the Remington Old Model Army (OMA). A total of 6, 000 OMAs were made; all went to the Union army. The OMA was a transitional model. It started off looking like the Remington-Beals, but by the middle of the production run we see exposed barrel threads, an enlarged web and safety notches in cylinder. One unique OMA feature was a channel cut in the loading lever so the cylinder could be removed without dropping the lever. This proved to be a bad idea, and it disappeared when the New Model Army model was introduced a year later.

But that really doesn’t say much about which one was the best. After all, Colt had over a decade of brand recognition behind it, while Remington was a relative newcomer to the handgun game at the time.

So let’s compare the features on each gun and see if one of them ticks off more boxes. Both models are nominally .44-caliber guns with six chambers and 8-inch-long barrels. They are actually .45-caliber guns with 0.454-inch bores. They fire the same-sized balls, and the military used the same 30-grain powder charge in each of them. But there are some substantial differences.

Of the two, Remington definitely has the stronger design. Colts are modular guns. Their grip assemblies, barrels and loading levers are not permanently affixed to the revolver’s frame. The grip assembly is a bolt-on affair that is attached to the frame by five small screws. These guns are called open-tops because there is no frame enclosing the top of the cylinder. The barrel assembly is held onto the gun by a wedge that passes through the Colt’s massive base pin, which is known as an arbor. All of that combines to give cap-and-ball Colt revolvers an archaic look to modern shooters.

In contrast, the frame on the Remington is a much more robust unit. The Remington New Model Army revolver has an integral grip frame, and it has a solid frame, with a topstrap over the cylinder. The barrel is solidly screwed into the frame, just as
you would see on a modern-made revolver.

Remingtons have the sort of conventional sights that you would expect to find on a revolver. The front sight is a pinched post that is fixed on the end of the barrel, and the rear sight is a channel milled into the top of the frame. The front sight on the Colt 1860 Army is a fixed brass blade, but, as a consequence of its open-top design, the rear sight on the Colt is quite different from what modern shooters are used to. Without a topstrap to work with, Colt made its rear sight by notching the nose of the revolver’s hammer. This seems like a pretty crude design, but it absolutely works.

The only real knock on the Remington design is that it is affected by fouling to a much greater degree than the Colt. The thin base pin and lack of any cylinder bushing or gas deflection ring means that nasty blackpowder fouling builds up on bearing surfaces very quickly. If you fire 10 rounds without cleaning through most Remingtons, you will start experiencing noticeable drag when you cock the gun. Colts, on the other hand, will run smoothly for as long as you care to shoot them.