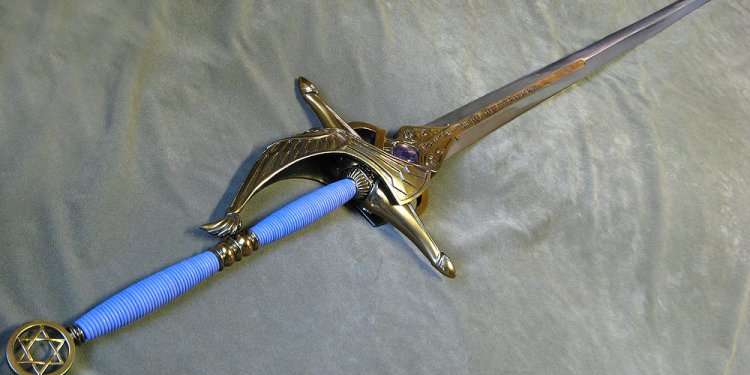 
Down the street from a Kroger shopping center and a Wal-Mart in Marietta, Georgia lies an arsenal. The Empire Swords shop looks unassuming enough from the outside, but once you step through the doors...

Swords, axes, staves, and daggers line the walls. Racks filled with cruel-looking implements of destruction stand before giant sets of armor. Every possible surface contains metal instruments that could kill in the right hands, from butterfly knives to broadswords taller than your average man.

The video game sword replica business is a multi-million dollar industry which has grown in great leaps and bounds over the past several years. From Prince of Persia to Mortal Kombat to Halo, new weapons come to market at an astounding rate, selling out nearly as quickly as the local sellers can import them. Leading the way is replica dealer Empire Swords.

An Empty Hand Craves A Sword

The sword has long been a pivotal aspect of human culture. Much more than a weapon of war, the sword has been used to represent triumph, defiance, loyalty, betrayal, and even love. As children we took up sticks, participating in mock battles between good and evil in our backyards, given courage by broken tree branches we imagined as gleaming weapons of old. Now, in this age where our weapons are represented on screen, our hands reach for plastic controllers instead of imaginary leather-wrapped hilts, and the sensation is nowhere near as satisfying as swinging real steel.

That's where the video game weapon replica business comes in.

Up until several years ago, there really wasn't that much of a market for video game replicas. Cutlery shops carried the odd assortment of martial arts weapons along with the rare recreated movie prop, while medieval weapons dominated the collector's market, doing huge business at Renaissance Fairs and science fiction conventions.

Early video games simply didn't warrant weapon replicas, as the weapons represented in such games were too crude to carry recognizable characteristics. Swords weren't much more than straight lines, and there isn't much of a collector's market for accurately recreated straight lines. It wasn't until the late 1990s that video game weapons really began to develop distinctive a character all of their own. There was a cloud on the horizon...a cloud with a very, very large sword on his back.

An Audience With The King of Swords

It crosses my mind upon entering Empire Swords that were a group of time-displaced Vikings find this shop, the Wal-Mart wouldn't stand a chance. Then the shop's owner comes out to welcome me, and I think, "Too late, the Vikings are already here."

Perhaps he isn't a Viking, but Empire Swords' owner Scott Marlatt, with his long hair, high forehead, and steely gaze, looks every bit like he could step back through time and be perfectly comfortable living by the sword. In a way, that's what he does.