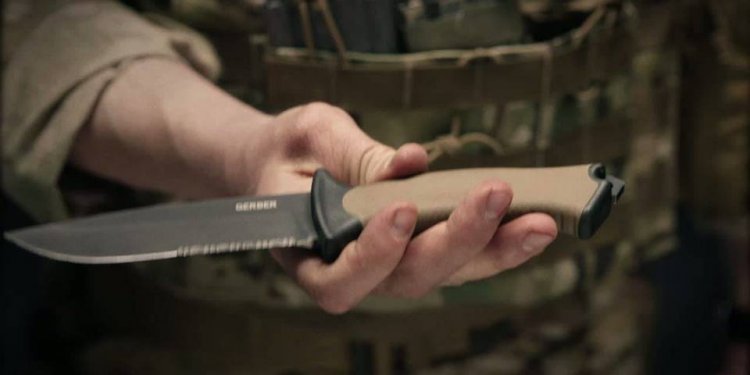 Rated 4.4 out of 5 by by Buckeye49 Gerber Big Rock Camp Knife - Best ALL-AROUND for the $ I like my Gerber knives; and I have lots of them, and Buck, and Ka-Bar and many other name brands. I do note that the Big Rock is not made in the USA. HOWEVER, I took a chance and bought one of these in the plain edge. The knife is worth every penny spent. Yes, some will compalin about the ugly nylon sheah. But, hey, the sheath works and I didn't by the knife because I wanted the sheath, I bought the kife because I wanted a GOOD, all around depenable knife that has a GREAT edge and holds up to abouse. Well, I liked the plain edge so much I also bougth a Big Rock Camp Knife with the serrated edge, so I would have one to cut easily through plastic or seat belts in an emergency. Recently I got my plaion edged one out to use it. I remember how much I like it and that maybe some day I would no longer be able to find it again, so, I just ordered another one. What more can I say? The blade is very, very sharp out of the box and holds a good edge. The rubbery grippy handle is great, although thin, but the feel in your hand is good and it won't slip. The knife can be ussed for a variety of regular camp tasks, batoning, slicign, fish skinning, animal skinning, and etc. If you want a good fixed-blade knife and are on a budget; don't even think twice; buy this knife, you WILL be happy you did. March 25, 2013

Rated 5 out of 5 by Buck Field tested Bought this knife several years ago. It's well balanced and feels good in your hand. I carry this knife hunting and fishing, and have dressed out several deer. A great buy at a great price, works better than other knives at 3 times its cost. October 15, 2012

Rated 5 out of 5 by Last, Best Hope for Humanity. My favorite knife. Bought this 2 years ago. Feels great in my hand, great weight, nice and sharp. I like a knife I can throw and use more practically. This holds up for both. I've [*] and tore up the rubber handle and took tiny chips out of the blade, but this was after 2 years of serious use. This is a gem for the amount of abuse it can withstand for such a cheap price.Gerber is my go to. Their products have never let me down. June 13, 2011